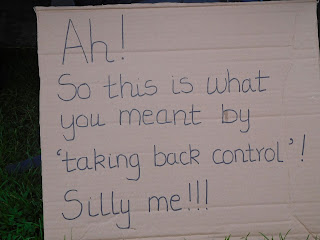 Up until last thing on the night of Friday 30th, RIC-Edinburgh was going to be at the 'Stop Boris' Glasgow rally in Glasgow, the following day. Then we heard that following protests to be organised on Aberdeen, Dundee, Inverness, Lerwick and Kirkwall, 'Another Europe Is Possible' was calling for a demonstration in Edinburgh. What to do? Some RIC-Edinburgh supporters went to the Glasgow demo, others went to the Edinburgh demo.

Allan Armstrong spoke for RIC-Edinburgh at the Edinburgh demo. 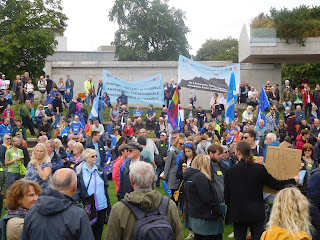 RIC-Edinburgh banner behind the protesters at the Scottish parliament on 32.8.19

I am Allan Armstrong from the Edinburgh Radical Independence Campaign. If you turn round you will see our banner above you at the back. It reads:-
Another Scotland is Possible
Another Europe is Possible
Another World is Possible
I think these are sentiments which unite a lot people here today.
We have heard many politicians talking about the unconstitutional and illegal nature of Boris’s coup against Westminster. But Westminster quite constitutionally and legally presided over centuries of chattel slavery. When slavery was abolished, they compensated the slave owners not the slaves. When the City bankers helped to precipitate the 2008 Financial Crisis, Westminster ensured that, instead of these people facing jail sentences, they continued to receive massive bonuses. Their debts were offloaded on to us in an austerity offensive.  When Westminster presided over the 2012-14 Scottish independence referendum campaign, it was quite consistent with their  duplicity to make a ‘Vow’ sanctioned by David Cameron and Gordon Brown, which they had no intention of honouring. When Westminster presided over the 2016 EU referendum, it excluded EU residents and 16-18 year olds. They had been allowed to vote in the Scottish independence referendum. And in this year’s Euro-elections, Westminster presided over the removal of a large number of legally entitled EU voters from the electoral register.
And one of the key features of their anti-democratic Crown-in Westminster set up is the Union – the United Kingdom. This, along with the Crown Powers reinforces the forces of reaction. Therefore, a key part of our struggle for democracy is to break the Union. This would benefit not only the people of Scotland, Wales, a united Ireland, but yes, of England too. It is the unionist state that has given such power to slave-owners, landlords, bankers and bosses across the whole of the UK. The UK state unites them but divides us.
Our reply to their anti-democratic constitutional sovereignty of the Crown-in-Westminster is our republican democracy – the sovereignty of the people. Our reply to their legal attacks on our rights is the demand for social justice. Our reply to their imposed UK is our self-determination. 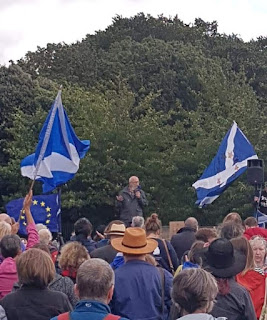 Allan Armstrong addresses the protesters outside Holyrood
After the speakers, Luke Henderson asked the protesters if they wished to make their way from Holyrood up the High Street and down to the Mound. If so they should gather behind the RIC banner. About four fifths of those present did so. 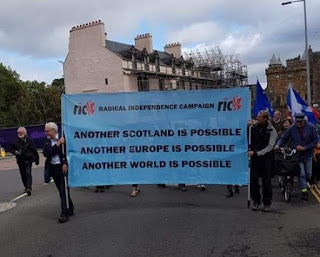 RIC-Edinburgh leads the impromptu march from Holyrood to the Mound