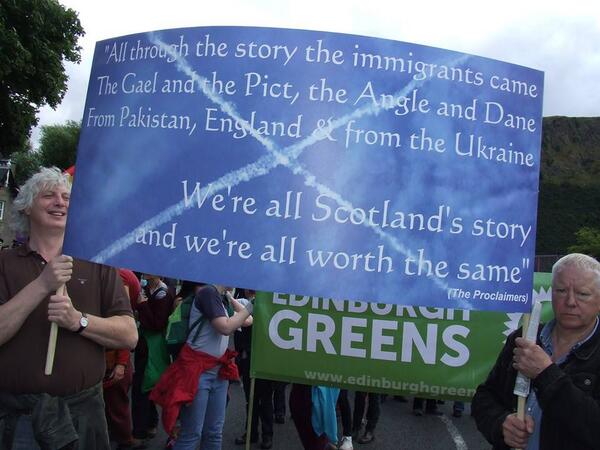 On Friday, Nigel Farage will attempt to bring his poisonous and racist politics to Scotland. Along the way, he will receive the full attention of the media, which up until now has only ever shown a glimpse of possible criticism. But not this time, not here. We want to make sure, that we make clear that Scotland is, and must remain, a UKIP free zone.

We want the broadest possible display of community and solidarity to say that Scotland rejects UKIP. We want nothing to do with their toxic political views and their strategy of fear and division.  Our peaceful mobilisation and rally will be included in the press who have been uncritically following Farage for months on end. We will ensure that our alternative is heard, and indeed, that the mainstream opinion of UKIP in Scotland is made clear. A refreshing change to the near daily dose of UKIP in the media. On this occasion Farage will not get it his own way, as we will challenge the idea that they represent any sort of progress. As we know, whenever there has been an genuine challenge to their abhorrent views, they have collapsed like a pack of cards.

Speakers from an array of backgrounds will outline our vision for Scotland and expose the bigotry of UKIP. We are determined that the media will not get away with the same constant and sycophantic coverage that Farage has received up until now. We want to articulate our vision of a welcoming, inclusive and diverse society that embraces internationalism, and rejects the narrow and prejudiced mindset represented by UKIP.

Our Scotland is a modern society of many cultures, based on unity and human rights regardless of your race, religion, sexuality or gender. That is the society UKIP want to see the back of. We as a nation are turning our back on them.Bring your banners, home made signs, friends, family, colleagues and campaigners. We want to create a determined, positive and uplifting rally of protest and promote our alternative to immigrant scapegoating, sexism and homophobia. Join us in our opposition to a party based on hatred, and help keep Scotland standing strong against Farage. Organisations and campaigns who stand for equality and multiculturalism are welcome to join us.

Look out for announcements of speakers and event developments over the coming days.

Join the facebook event here. On Friday, meet from 6pm at the Corn Exchange, Newmarket Road.