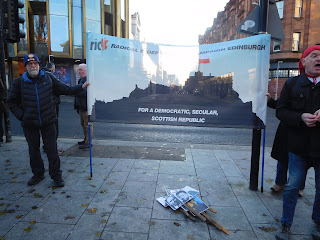 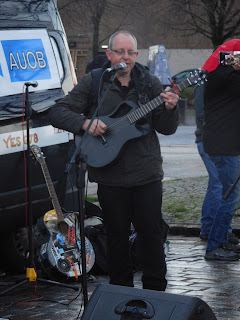 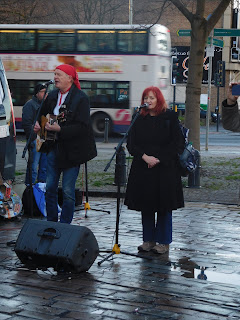 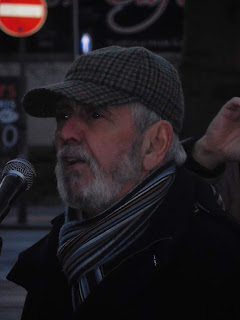 The legendary Arthur Johnstone songs Freedom Come All Ye and the Internationale
The newly formed johnmaclean100lscot organised a series of events on Monday December 3rd to commemorate the exact centenary date  of John Maclean's release from Peterhead Jail, his train journey to Aberdeen, and then on to Glasgow, where he received a hero's welcome from a waiting crowd, estimated to be 100,000 strong. Information about this can be seen at:-
http://www.war-times.org/revolutionaries-gorbals-one-hundred-years-red-clydeside
The event began in Aberdeen, at 8.00 am, when a group from Aberdeen Trades Council celebrated the welcome given to John Maclean as he changed trains on his way to Glasgow. In Glasgow, about 80 people walked the exact route that John Maclean had followed from McPhater Street to Calton Place on the south bank of the River Clyde.
This was followed by a brief introduction from Alan Smart of johnmaclean100, in which he emphasised the significance of John Maclean in linking the National and Social Questions, and pointing to his relevance today. In particular, Alan highlighted the need to support those women in Glasgow who had taken strike action for equal pay against the now SNP controlled Glasgow council, after their let down by Labour in the previous administration. Alan also supported the pay claim being made by Scottish teachers in the EIS.
After Alan's introduction  a number of performers played a variety of songs, many about John Maclean, as well as about various struggles from the Wobblies in the USA to the 1984-5 Miners' Strike. The performers included johnmaclean.100 members, Pauline Bradley, Shaun Moore, Gavin Paterson, and Alan Smart. RIC-Edinburgh's very own Gerry Mulvenna sang a song he had written about the current situation in Catalunya. He spoke of the significance of the current hunger strike to force the European Court of Justice to press for the release of the Catalan political prisoners held by the Spanish state. The legendary Glasgow traditional music performer, Arthur Johnstone finished off proceedings with Freedom Come All Ye and the Internationale.
The RIC-Edinburgh banner was there. This went some way to make amends for the role of Edinburgh in John Maclean's life. It was in Edinburgh's Calton Jail that he was first imprisoned in 1916 for his opposition to the First World War. It was in Edinburgh's High Court on 9th May 1918, that John Maclean made his famous Speech from the Dock, before being sent to serve a punitive labour sentence in Peterhead Jail. Perhaps, not surprisingly, Maclean did not return to Glasgow via Edinburgh!
However, the great James Connolly has gone a considerable way to retrieve Edinburgh's reputation. He saw two Edinburghs - the one from below (quite literally from The Cowgate) - and the one from above - "the snobs, flunkeys, mashers, lawyers, students, middle class pensioners and dividend hunters". It was with the support of the latter that Edinburgh's High Court was able to jail John Maclean. Today, RIC-Edinburgh places itself in that other tradition - the city from below.
_________________
Gavin Paterson also has a programme on the Celtic Music podcast. The most recent one had the following playlist:-
Come In Come In - Andy Stewart
The John MacLean March - Tonight At Noon Gavin Livingstone
Oh, Freedom - Pete Seeger
The Glesca Eskimos - Glasgow Song Guild (Josh MacRae)
Ding Dong Dollar - Glasgow Song Guild (Nigel Denver)
The Twa Corbies - Andy Hunter
If You're Black Get Back (Black Brown & White) - Danny Kyle memorial page
Bearsden Breakdown - Allan Tall
Maggie's Pit Ponies - Nancy Nicolson
Farewell To The Monty - Gerda Stevenson
In The Vale Of Aberfan - Freddie Anderson
When This Bloody War Is Over - Rab Noakes
The Red Clydesiders/Mrs Barbour's Army/Don't Sign Up For War -  Alistair Hulett Memorial Trust
The John MacLean March - Arthur Johnstone
The Eskimo Republic - Jimmy Ross
The Ballad of John Maclean - Pauline Bradley & Bernadette Collier
The Man In Peterhead - Alastair McDonald & Gavin Paterson
The Freedom Train To Glasgow - Alan Smart
The Singing Dominies - Shaun Moore
Scottish Breakaway - Liam Clancy
When Dawns The Day - Andrew MacDonald
Thomas Muir Of Huntershill - Dick Gaughan
We Shall Overcome - Pete Seeger
Freedom Come All Ye - Glasgow Song Guild (Jack O'Connor)
This podcast can be seen in two parts  at:-
http://podcast.canstream.co.uk/celticmusic/index.php?id=27248&fbclid=IwAR0WTTu10DXh3C-jBE_FXLk10gSS6knN6de_wDyJO3O9bUJUw1Y2R4OaZMQ
http://podcast.canstream.co.uk/celticmusic/index.php?id=27249&fbclid=IwAR2Qa_dZk-OeuGFXyknKcV9pDNrQQ_ge6rxPBFY7SN5lmLxLPpS3XqjToU4